How is it possible to 'rupture'[1] the technical image? So that it both points at the world and at the same time makes a play with that pointing activity, as in Gillian Wearing's Dancing in Peckham, 1994, where the artist dances in a shopping mall, dialogue-ing with the camera which captures the amused look of passers-by. 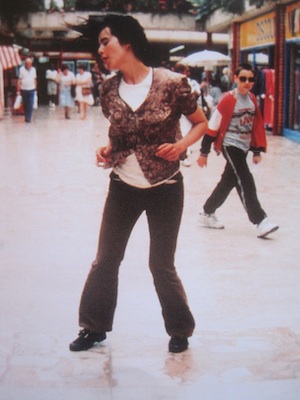 It makes you want to dance as well, as if that very activity would somehow rupture the control of apparatuses like shopping malls and video cameras. It appears as though it is 'the natural thing to do' while being incongruous and demonstrating the power of art to set alternative limits. It questions the language of media culture by combining performance art with video, while keeping the work firmly in the art context, unlike Clare Hope, whose work exists in the moving image context.In this way, the work also 'makes a scene' in terms of the gallery context, as a moving image piece usually exhibited alongside paintings and sculptures.

This exhibition has been curated by Eleanor Nairne and Rebecca Lewin, recent graduates of the Courtauld Institute, commissioned to carry out 'Starting Point Curatorial Fellowships' from the Contemporary Art Society. It is fresh and positive and they simultaneously contextualize Dancing in Peckham,with Gilbert and George's Gordons Makes Us Drunk, 1972, and use Dancing in Peckham as the basis for the show as a whole.

The problematic of the technical image as art is one strand. Gordons Makes Us Drunk is exhibited with the monitor placed inside a baby grand piano, thus presenting the work as 'typically English' and Classical.

Chris Offili's Two Doo Voodoo, 1997, represents photographs of black icons within the context of an elaborate painting punctuated with elephant dung. Offili 'disturbs decorum' by questioning "...the reputation of black artists and cultural figures as the voodoo king, the voodoo queen, the witch doctor, the drug dealer, the Magicien de la terre." [2] Perhaps also to the point is that which Flusser argued: "Media form bundles that radiate from the centers, the senders. Bundles in Latin is fasces. The structure of society governed by technical images is therefore fascist, not for any ideological reason, but for technical reasons. As technical images presently function, they lead on their own to a fascist society." [3]The bundles of elephant dung therefore can be seen as 'media bundles' sent out from the center; a critique of technical image culture.

In contrast to this thread is the presentation of artworks which look at 'making a scene' in aesthetic terms. Howard Hodgkin's Simon Digby Talking, 1972-75, is an abstract 'metaphor for emotion', and as such recreates the 'scene' of personal interaction in painterly terms. This level of communication; of a recollection transcribed into paint explores both the intimacy and the functioning of memory. That Dancing in Peckham is a communication directly with the viewer, as well as indirectly in indexical terms, and as a recording, echoes the conversational dimension to Hodgkin's painting. Time is foregrounded.

The performance aspect is another thread. Cornelia Parker's Maybe, 1995, is about an 'absent' performer's (Matilda Swinton) presence; the residue contained within a small perspex box of 'props' that look like hair ornaments. 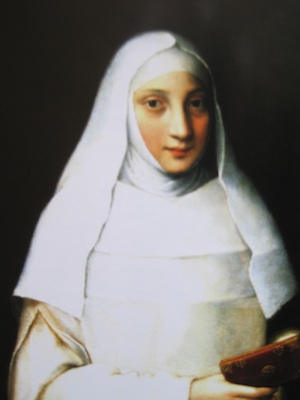 Sofonisba Anguissola, The Artist's Sister in the Garb of a Nun, 1551, Courtesy Southampton City Art Gallery

It is also wonderful to have the opportunity to see Sofonisba Anguissola's painting The Artist's Sister in the Garb of a Nun, 1551. One of the few women artists of the Renaissance to become known in her lifetime. As though the curators can't believe their luck, this delicate and yet powerful painting fits their theme. Anguissola's sister helps her to stage the 'performance' and representation of a nun, and the connection is made between Parker's 'valuable relic' of a performer and the performance aspect in Dancing in Peckham.

Continuing aesthetically provocative work, Fiona Rae's Fast Breeder, 1997, is a cross between action painting and a play on "shifting and transformation" [5] characteristic of the moving technical image. Bill Woodrow's Electric Fire, Car Seat and Incident, 1981, connects objects to imply a narrative through the transformation of parts of the objects' material; from the fire he creates a gun, from the seat he creates the shape of fire. Again, this refers to, or suggests, the technical moving image.

Anthony Green's The Dinner Party, 1966, recreates a domestic scene; a dinner party, and the painting is remarkable for its vertiginous projection systems. It is the recording of the scene :"Everybody except Mary and me is now dead".[6] Green's combination of projection systems creates an uncanny emotional space like Dancing in Peckham.