Is 'techno-imagery', as Vilém Flusser put it in 1978, an under-appreciated aspect of the future of the image? This show, curated by Helen Sloan of SCAN, perhaps posits this question, through the focus on electronically generated imagery. She believes that digital art is reaching a new stage, one where there can be more of a relationship with art made using more traditional media.

Having said that, the show is destined for ISEA (International Society for the Electronic Arts) in Istanbul in the Autumn. Therefore the work is also located within this still largely parallel tradition of electronic art. As such, this show is the first of its kind that I've seen outside the festival circuit, which combines electronic art by a collection of artists under an emergent theme. 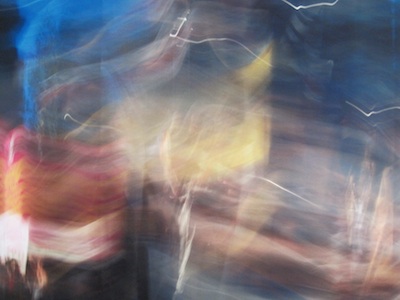 Sigune Hamann's large photographic print, Whitehall 9.12.10, of the student protest against budget cuts, almost appears as an afterthought, and yet it is almost pivotal to the interpretation of this collection of works; on the one hand indicating a concern with the societal change which might accompany this electronic vision by doing what film and photography does best: capturing a reality indexically, while on the other hand abstracting the imagery through movement while exposing the film over time. This ‘tracing’ of movement, which leads to the abstraction in this photographic panorama, breaks the stillness of the image. As the work deals with the combination of stillness and movement in images, there is a dialectic within the work between life’s urgent contingencies and an image which appears over time and therefore becomes historical.

The 'broken stillness' of the title implies an energizing influence, one which questions the stasis of traditional media, although Sloan is quick to reassure us that the viewer of the exhibition should ’slow down’ in their reception of the work. The overarching quality of the theme, though, is one that explores the complex relationships we have with data. For instance, what does it mean to 'break the stillness' of images in an art gallery, with animation or, as in Hamann‘s case, the movement of the photographer? The movement is quite simply part of the art. 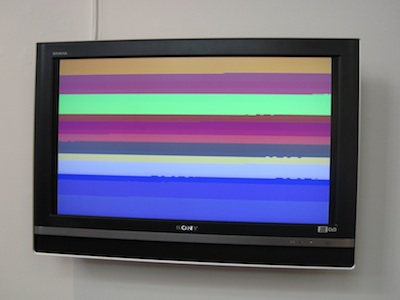 The techno imaginary is one of data dynamics, a quality exemplified by Tim Head's Laughing Cavalier, as it rapidly selects combinations of coloured lines at random, flooding the screen with the program’s choices. Head is interested, though, in the physical properties of data, and he wants to ’expose’ these properties, pulling away from the virtual and towards real space. In modernist terms there are stripes on the screen, and yet in contemporary terms we are looking at the flow of data as the stripes change colour frenetically. And yet if the movement is part of the art, then Head appropriates the fact of data selection rules to demonstrate the complexity of the method. What could be a static image, perhaps a painting on canvas, is made moving through this comparatively simple procedure.

In contrast Susan Collins' Glenlandia is reassuringly 'slow' in its relationship with data, captured via a webcam located near to a man-made Scottish lake, Loch Faskally, over a period of two years. The images were recorded pixel by pixel, and the images were gathered from top to bottom and from left to right, in horizontal rows. The indexical aspect of Glenlandia is used to build a notional place, which is a synthesis of landscape and technology over time, and an archive which becomes an artificial site in a parallel sense to the actual site. Dialectically, this interrogates the notion of data as convincing to the extent of a relationship with artificiality, and more extremely, virtual places, while at the same time emphasizing site-specificity.

Susan Sloan's work uses indexicality in the form of motion capture, synthesized with computer graphics models of upper torsos and heads to create moving image portraits. In the portraits of Mary and Annie , the models move subtly, Sloan’s interest in motion capture being one of ‘slowness’ and a documentation of existence, which both suggests 'aliveness' and agency, as well as the recorded motion captured cycles of computer games. The detail in the sculpting of the head and torso of the subjects is extraordinary, and complements the detail of the motion captured data, the gestures and movements of the sitters. The dialectic of stillness and movement is therefore located here in the slight ‘animation’ of the traditionally static method of portraiture.