This exhibition features work by three artists: Simon Faithfull, Inger Lise Hansen and Tal Rosner. All the works are animations, and the exhibition has been co-curated by Spacex and Animate Projects, continuing the increasing enthusiasm artists have for the moving image. It is refreshing to see a complete exhibition of moving image works, displayed as a collection of individual pieces, each with its own space. 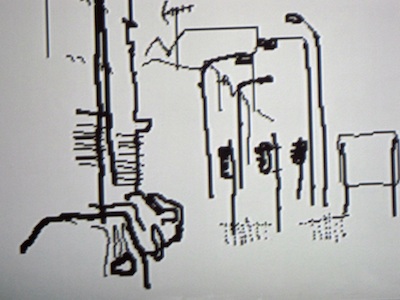 'The World' is used in a generic sense, placing the emphasis on viewing the specific portrayals of landscape and environment documented by these artists.

Faithfull's animation, 13 (2004), finds the artist walking along the A13 trunk road with his Palm Pilot on which he makes drawings of the views along the way. This is the portrayal of a dog's journey, back to Barking, and as such it is a whimsical piece, where the hand-drawn computer plotted drawings break down into pixels and reform into a relentless flow of traffic, or the drifting river at night. 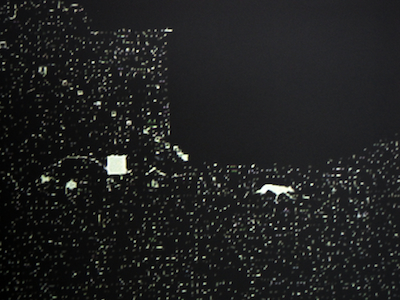 The effects are part of the charm of this animation. Day is white, and night is simply black, with a composited revolving moon in the monochrome sky. This animation continues Faithfull's interest in computing and location.

Tal Rosner's Without You (2008), maps 'modernist' industrial suburbia, into an animation which mixes the abstraction of the coloured corrugated metal of industrial buildings, with footage of birds alighting on telegraph wires. The visual effect of overlaying modernist arcitectural designs, creating colour and structural compositions with what's there, to be found, is curiously satisfying, while raising the awareness of the modernism that exists in industrial complexes. 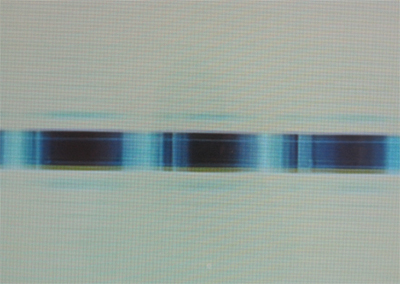 Without You - Tal Rosner

Inger Lise Hansen's films are exhibited in the form of a trilogy. Much like Baselitz's paintings, in all three films the ground and the sky are inverted, so the sky is in the bottom half of the projected image, while the ground forms a type of 'ceiling' on the top. This is like looking at an impossible space, and sometimes the images appear to be those of a fantasy environment. It is as if the ceiling were an animated landscape.

In Travelling Fields (2009), the optical effect of the inverted time lapse camera, which has been moved across the landscape, a centimeter at a time, is one of both miniaturising the landscape, so that trees blowing in the wind appear like models, while the movement of clouds swirl around as an inverted abstract image.

Parallax (2009), apparently celebrates the 'supremacy of the machine over the human gaze' [1]. And it is the case that part of the effect of this trilogy, is to make the viewer aware of the artificial nature of electronic imaging. 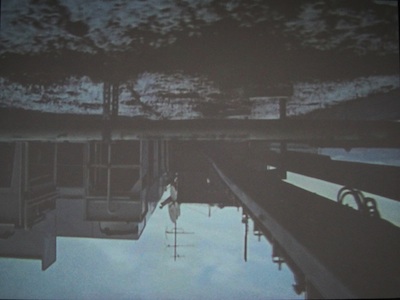 In the third film, Proximity (2009), there is a similarity with Faithfull's work, where studying the ordinary lanscape reveals that landscape to us in a way which links the technological 'treatment' to the place. Here, traffic crosses the landscape, where sky meets earth, and a series of different weather's effects emphasise the influence of sky on earth.