Critiquing the materiality of computing itself is part of the theme of the three exhibitions which are included in the Arnolfini Old Media season. 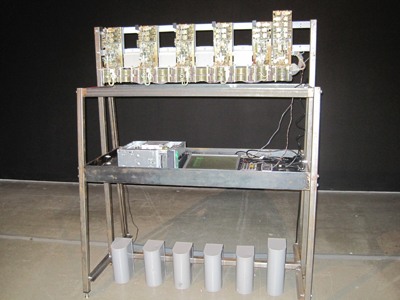 Taken together, they explore the issues of the energy powering computers and telecommunications, and the awareness that what happened to the coal mining industry in this country, under Margaret Thatcher, has effectively moved the issues of the effects of mining on miners' health, to other countries like India, China, and, in the case of Tantalum, the Congo region in Africa. What was also lost with the closure of the pits in this country, was the strong sense of community as well as a robustly defined working class political allegiance. Accompanying video sequences explore the complex effects of closing the mines from the point of view of individuals, like activist Dave Douglas, who had thought that coal would continue to be mined, based on the 'Plan for Coal', and artist Rachel Horne, "it was called the death valley" [1]

This similar absence of political allegiance is partly what the Tantalum Memorial has sought to address, building common ground by connecting, through a networked art work, members of the Congolese community living in London, in collaboration with the Congolese radio station Nostalgie Ya Mboka. "Social telephony is thinking in terms of an "aesthetics of connectivity", finding ways to build social networks between people that allow them to communicate in unexpected patterns and reveal different kinds of relationship." [2]

The Memorial's primary function, though, is to commemorate the "3.9 million deaths and over 361,000 refugees created by the so-called 'coltan wars' in the Congo region."[3]

Coltan is mined to extract the metal Tantalum, used in mobile phones, for example. This has led to conflict between international mining companies and "warring local militias". [4] Therefore, the politics surrounding mining is key to understanding both of these works, and to a potential ethics of sustainability and minimisation of health risks. This seems almost an impossibility, as the Coal Fired Computers piece demonstrates. "The UK currently produces less than one third of the coal it uses. Importing the majority of it whilst displacing 150,000 tons of coal dust into unknown lungs." [5] 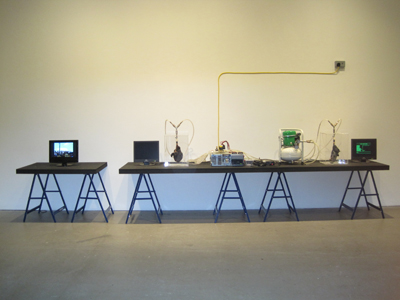 The monitors display statistics about mining facts and its effects. Artificial lungs demonstrate the breathing capacity of individual miners whose affected health has been documented.

This concern with the materiality of computing sets an ironic tone to the next exhibition, 'Fun with Software', curated by Olga Goriunova. It is never-the-less presented as a study of 'the encounter' between art and computer science, and the fun of invention.

From Alexei Shulgin and Victor Laskin's WIMP (Windows Interface Manipulation Program) to Jodi's All Wrongs Reversed there is the sense of net art's ironic humour, even as the artists exploit the qualities of old computer media. As well as being a VJ tool (this has to be ironic) WIMP critiques the 'core of GUI' in Windows. Pressing a single red key on the keyboard cycles through 'effects' like flipping windows, to propelling them in space. All Wrongs Reversed is a recording of Jodi's programming of a Sinclair ZX Spectrum, where abstract lines are 'drawn' across the screen and then reverse over one another. Both works explore the languages of power, in terms of the manipulative qualities of software, and the relationship with imperialistic languages. The macho qualities of WIMP are very real, and the implication in All Wrongs Reversed is that of modernist ideologies manipulated by these knowing programmers.

This is an example of how net artists, like Jodi and Shulgin use a different aesthetic to the more 'traditional' works made with the computer. They critique the materiality of the machine itself, as well as its 'applications'.

Harwood's London.P1 is a Perl program of William Blake's poem London, displayed as large prints which appropriate Blake's imagery to surround the program text, which is a mass of comments and calculations of dispossession. If the program were run then it: "would calculate and broadcast the air displacement needed to represent the public scream of dispossessed children in London from 1792... until today" [6]

The other works in Fun with Software contextualise these art works for the novice through to the potential geek or officianado. A bank of computers in one gallery gives access to runme.org, a software art repository which has been contributed to since 2002.