The work of boredomresearch in this, their latest show, is what Mark Amerika would call 'avant-pop', in both the rendering of the Whirligigs, which are like a gothic computer game, and the presentation of the prints, Brilliant Cloud Series, which are delightfully framed to emphasize their irregular borders."Artists who are immersed in digital processes are contemporary versions of what in the twentieth century we used to call the avant-garde. Thankfully, they no longer have to pretend to be ahead of their time since, as experiments in neuroscience have already suggested, they have no choice in the matter." [1] 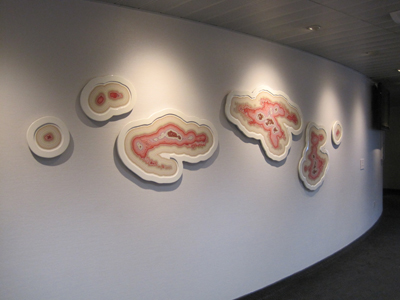 We have to locate this discipline somewhere; just as photography or painting have intrinsic qualities, so using computers to make art embodies skills which have to be mastered at a craft level. boredomresearch know their craft and this is to a partial extent why their works demand such serious contemplation. They show great skill in exploring what is technically possible in a way that is both light and satirical at the same time.

The Brilliant Cloud sequence of prints are treated very much as objects whose specifications have been plotted on computer. They exist somewhere between the weightlessness of clouds and the density of rock. There is something deeply ironic in their exploration of a kind of ergonomics, with the work of describing the objects expanded upon through the use of special frames. This of course relates to macine culture and efficiency, as well as machine descriptions of 'nature'. The prints problematize the whole notion of objects that are built to last, through to the very essence of the images based on rock formations.

What I like about this work in the exhibition is that it's all generative. There is also a dialogue between machine language and nature, a common theme from earlier work to the present show. 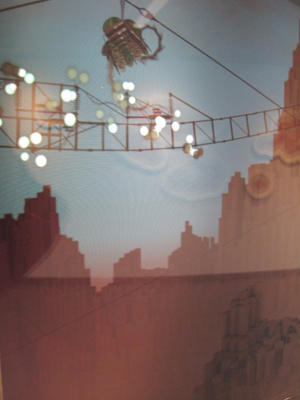 The Whirligigs are automata 'fleshed out' through animatography as hybrid creatures somewhere between tiny machines and artificial life, who have their own imaginary logic. Again, a lot of thought and technical skill has gone into the presentation of these works, so that they appear like animated paintings mounted on the wall. This appears then to be art of the future; reconfiguring perception through a kind of electronic performance, which due to the instability of the medium can't easily be built to last, is temporary and fleeting."...they are really avant-pop (A-P) artists: they naturally play with whatever new media technologies are developing in the pop culture while at the same time aesthetically engaging themselves with the forms of the mass media they are surrounded by." [2] boredomresearch, though, also seem to situate their work within a broader cultural tradition which has nothing to do with the mass media, but a lot to do with the gothic; Edgar Allen Poe, Mary Shelley, Ada Lovelace, and the prints echo work by Helen Chadwick, like her Viral Landscapes,for example.

In animatographic terms, (Computer Animation language), the Whirligigs appear to be programmed behaviourally, so that they charge up with energy by hooking onto the cables which stretch across the screen image. They 'fly' through the use of petal shaped wings which whirl around, giving them the look of automata, rather than natural creatures. And yet their tails have fine filaments which help to propel them giving them a natural look as well. There are beautiful details, like particles that explode from their whirly patterned heads occasionally.

The important thing about the Whirligigs is that they are rendered in real time, making their illusiory relationship with nature even more nuanced and complex. At the same time they are clearly automata, just like mechanical toys. The images, though, are never the same twice, so what you see when you visit the gallery is a unique rendering.