Discontinuity in Second Life has come in the form of "The Second Death of Caspar Helendale", the effective obsolescence of an avatar in Second Life. To the accompanying music of opera, streamed from The Royal Opera House in London, Caspar and his widow-to-be Trixiebelle Landar, entertained the assembled mourners with thoughts on what it means for an avatar to have had his day.

It was actually quite a moving ceremony, conducted in a purpose built mausoleum. They invited mourners to add names to their 'Book of the Dead'. It is perhaps significant that the continuity of computing can be signalled as a potential site for endings. 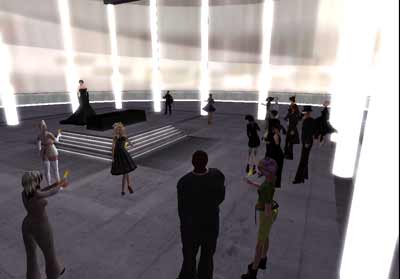 "What will you do when the servers run dry of faith?" [1] asks Caspar at one point. This is indicative of the type of reflection within the ceremony. The message is clear though, how long will your avatar in Second Life last? "I know that my redeemer has no further use for me." [2] The key factor here is how much effort some individuals put into their second life, embracing the concept wholeheartedly, and therefore becoming attached to their avatar-self. 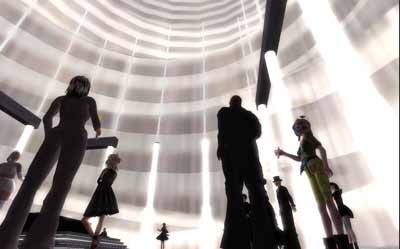 It is after all a real space in networking terms. One that the user can effectively extend themselves into. Some effectively role play, while others are more 'realistic' in terms of seeing their avatar as a representation of themselves. This amplifies the very nature of being online, and having a persona which others recognise. It is after all impossiblet to lurk in Second Life. This makes the reality of the networked space partially visible.

Will other's tire of their avatars in Second Life? Will there be similar ceremonies by people/avatars in the future? It is this existence online, as well as existing in real space which clearly fascinates people, and there is an excitement in terms of communing with other minds in real time. 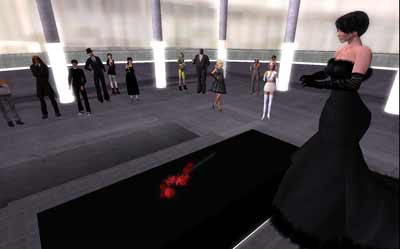 As Caspar said: "You've been spending a lot of time at that terminal lately." [3]

Elvgren Vargus looked lovely, and she led the mourners in terms of copious weeping. There is the sense that we are being shown how to live in a virtual space. This is where performance really excels, in terms of the continuity of live space/time. It was a performance within a type of performance, and yet the avatar experience in Second Life is a navigational necessity, a 'performance' of interactivity.